The main focus of the research carried out by the Galdiero group is the study of membrane proteins at different levels, with the aim of providing new information of relevance to biomedicine. The major goals are to illustrate the principles that govern the protein/membrane interactions and understanding the molecular forces underlying peptide-peptide interactions within the lipid environment of the cell membrane.

Using a multidisciplinary approach, which includes bioinformatics, peptide design, peptide chemistry, molecular and cell biology and biophysics, the group is working on membrane proteins involved in infectious diseases, with the goal of finding general rules that characterize most type of interactions involved between proteins and membranes.

The group has extensive experience in the various aspects of synthesis and structural characterization of peptides and peptidomimetics as well as in investigating their potential applications ranging from antimicrobials, anticancer, drug delivery and vaccines. Over the past ten years, the group has published many papers on nanoformulations functionalized with peptides for targeting and delivery.

The Galdiero group has the following major research interests:

One of the main areas of research of the group is the mechanism of viral entry. The principal focus has been on the study of herpes simplex virus type 1 entry through the contribution of its surface of glycoproteins and mainly glycoproteins H, L and B (gH/gL complex and gB). Through a set of biophysical studies and the use of peptides, the group has proposed that several surface glycoproteins of HSV can harbor sequences with membranotropic activity that assist each-other during the complex mechanism of membrane fusion that ultimately allow the infectious process of the enveloped virus to develop. The main results have shown that besides gB (the canonical fusion protein of HSV-1) gH is also mandatory for the entry mechanism. Those regions with such propensity can be analyzed and identified with a broad range of methodologies. The basic mechanisms employed by viruses to gain access into susceptible cells are similar throughout the different families of enveloped viruses. Larger viruses employ more complex mechanisms composed of multiple glycoproteins and several regions of each glycoprotein are needed to work in cooperation to merge two opposing lipidic bilayers.

DESIGN OF NOVEL MOLECULES THAT MAY BE USED AS ANTIVIRALS

The field of antiviral compound development is pivotal to combat viral diseases, with a special focus on compounds with a different mechanism of action compared to existing drugs. In particular, the inhibition of HSV attachment and/or entry is a main area of research of the group. Viral glycoproteins undergo several conformational rearrangements during the fusion process. Several domains buried in the prefusion structure may be exposed to the fusogenic structure and each of them may represent a potential target for the design of HSV inhibitors. Galdiero’s group studied in detail the structural basis of HSV membrane fusion and identified new targets of inhibition. We found that helical domains as well as surface loops may play an important role in the viral fusion process and represent possible targets of therapeutic interference. We observed that fusion peptides are able to inhibit viral fusion probably by intercalating with viral fusion peptides upon adopting functional structure in membranes, indicating that their inhibitory effects are a consequence of their ability to partition into membranes and aggregate within themselves.  Moreover, the analysis of the helical domains of the glycoprotein gB allowed both the achievement of a model for the conformational rearrangements that take place from the pre-fusion to the post-fusion structure and the development of promising first generation antiviral peptides.

The group is also involved in the investigation of the antiviral activity of functionalized poly(amide)-based dendrimers. The peptidodendrimer inhibits both HSV-1 and HSV-2 at a very early stage of the entry process, most likely through an interaction with the viral envelope glycoproteins; thus, preventing the virus from coming into close contact with cellular membranes, a prerequisite of viral internalization. These results show that the functionalization of a dendrimer with the peptide sequence derived from an HSV glycoprotein holds promising inhibitory activity towards viruses of the Herpesviridae family. 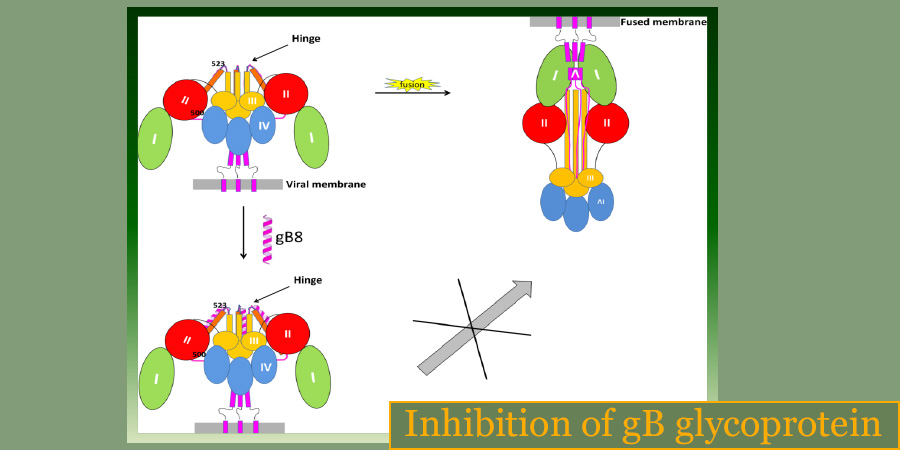 DESIGN OF NOVEL MOLECULES THAT MAY BE USED AS ANTIBACTERIALS

Antimicrobial peptides play a key role in many biological and physiological functions of living organisms and are an attractive starting point for the development of novel drugs. The group is strongly involved in the study of beta-defensins that have been demonstrated to have potent antimicrobial activity against gram-positive and gram-negative bacteria, fungi, viruses and parasites. Thus, defensins represent an excellent starting point for the development of new molecules able to fight infectious diseases. In this scenario, we have designed a number of analogues that have increased potency and reduced sensitivity to high ionic strength. Notwithstanding these promising features, defensins show some drawbacks such as extremely complicated and expensive synthetic protocols. In an attempt to overcome this limiting factor, the group has designed a cyclic mini defensin carrying the crucial active regions of the native sequences, which is not toxic, exerts effective antibacterial activity and is stable in blood. Given these features, this molecule may be considered a novel weapon in the fight against infectious diseases. The group is also working on other targets such as peptides derived from the antimicrobial fish peptide mixinidina. This topic is a very active and a open research field which is emerging as a key approach for solving the problem of antimicrobial resistance. 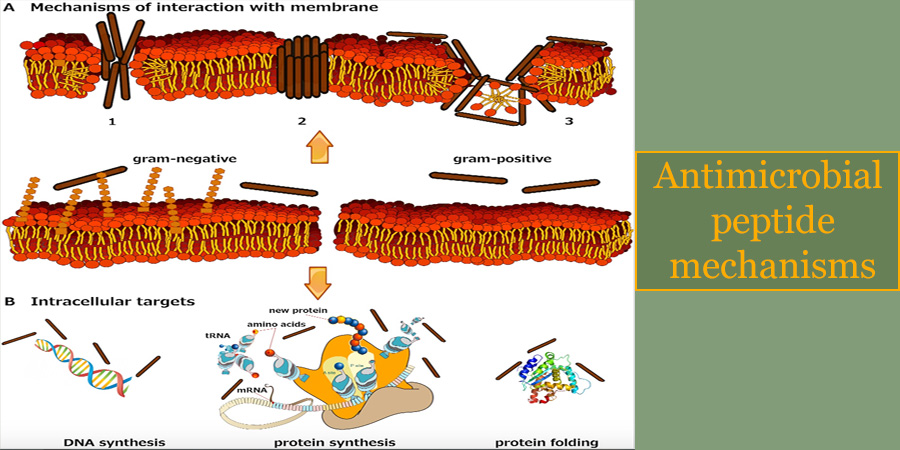 The group is strongly dedicated to the development of delivery vehicles for in vitro and in vivo theranostics applications. The group has developed a new class of membranotropic peptides derived from viral glycoproteins involved in the entry process and can carry different types of cargos inside cells. The available Cell penetrating peptides transport their cargo inside cells essentially using endocytosis.  The cargo needs to escape from the endosomal vesicle in order to exert its action.   If the cargo remains entrapped in the endosomes, the degradation processes take place and abolish biological effects.  On the contrary, membranotropic CPPs uptake mechanisms mainly involve direct penetration of the plasma membrane and, consequently, immediate bioavailability of the cargo. The prototype of these sequences is gH625. The group has reported the first use of membranotropic peptides for delivery across cell membranes and in particular for delivery across the Blood Brain Barrier.

One of the most important goals in cancer treatment is the achievement of pharmacologically active concentrations of chemotherapeutics in cancer tissues, avoiding drug distribution in healthy tissues. Up-to-date a plethora of pharmacological weapons are available in order to control cancer growth but for none of these selectivity toward cancer cells was demonstrated. Once accumulated in tumor tissues nanocarriers can release the drug or can be internalized in cancer cells through the endocytosis mechanism, resulting in intracellular trafficking in endosomes. Therefore, cleavage of the drugs out of nanocarriers and escape from the endosomes are further critical steps. Another complication of cancer therapy is the potential development of chemoresistance that is due to the selection of cancer cell clones expressing molecules that protect tumour cells from anti-cancer agents. The group has proposed the exploitation of the internalization properties of membranotropic peptides for vector-mediated internalization strategies. We showed the drug carrier ability of gH625 functionalized DOPG based liposomes encapsulating Doxo and revealed differences between the uptake mechanisms of free and encapsulated Doxo. Nuclear accumulation of free Doxo was attributed to drug diffusion, while encapsulated Doxo remained mostly in the cytoplasm with negligible nuclear accumulation. We recently reported on liposomes armed with gH625 that are able to overcome doxorubicin resistance in lung adenocarcinoma cell lines. 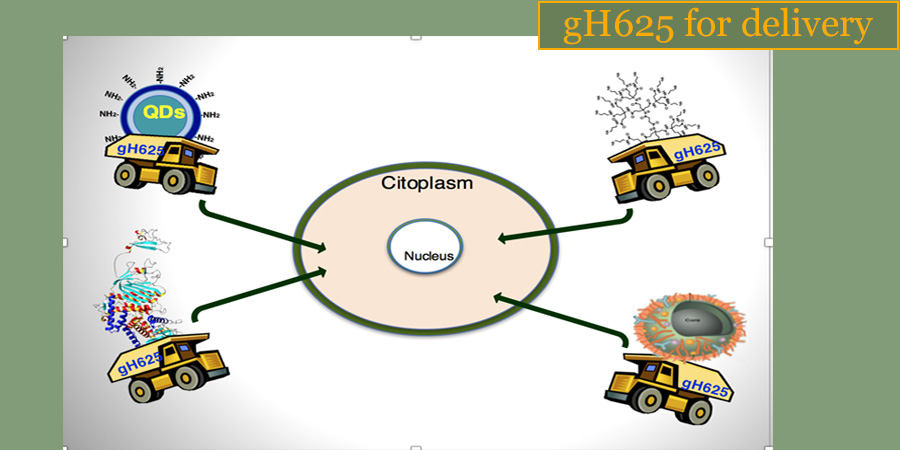 Current advancement in nanotechnology provides a novel platform for the development of potential and effective agents by modifying the materials at nanolevel with remarkable physicochemical properties, high surface area to volume ratio and increased reactivity. Among metal nanoparticles, silver nanoparticles have strong antibacterial, antifungal and antiviral potential to boost the host immunity against pathogen attack. Since metals may attack a broad range of targets in the virus there is a lower possibility to develop resistance as compared to conventional antivirals. Nevertheless, the interaction of silver nanoparticles with viruses is a largely unexplored field. We have analysed silver nanoparticles produced from different fungi showing that their antiviral activity is dependent on the production system used. We demonstrated that silver nanoparticles undergo a size-dependent interaction with HSV-1 and HSV-2 and with human parainfluenza virus type 3; the nanoparticles are capable of reducing viral infectivity, probably by blocking interaction of the virus with the cell, which might depend on the size and zeta potential of the silver nanoparticles. 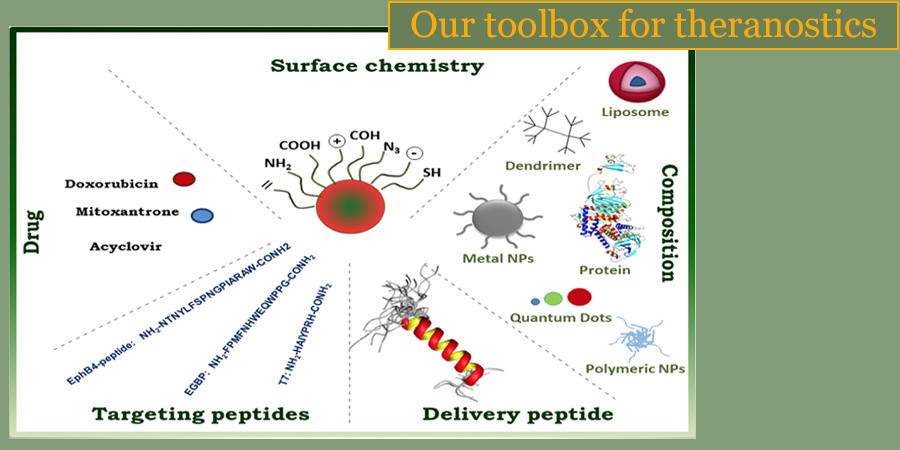